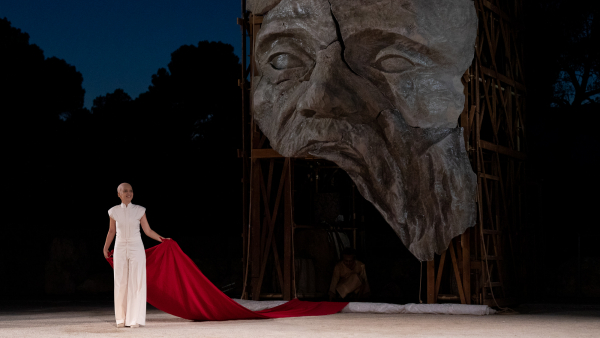 “Oresteia” welcomes the international audience – along with the Athenian citizens- in an iconic open-air venue of the city. The large-scale production folds the summer season tour in Attica and will be  presented with English surtitles, inviting everyone to an encounter with Ancient Greek Drama.

An innovative concept from the National Theatre of Greece: the only extant example of an ancient dramatic trilogy, Aeschylus’ Oresteia, in a single production by three directors staging their work for the first time at the Ancient Theatre of Epidaurus. Agamemnon directed by Io Voulgaraki, The Libation Bearers directed by Lilly Meleme, and The Eumenides directed by Georgia Mavragani.

Agamemnon
Agamemnon, the first part of the timeless masterpiece that is Aeschylus’ Oresteia, is the starting point for a multi-layered theatrical experience. With the myth of the Trojan War at its core, it was an immediate success when it was written (in the Athens of the 5th century BCE) and has remained so in every era up to the present day. After ten years, a king returns victorious from the most terrible of wars, only for his wife to murder him in his own home. This is a poetic universe in which man is an unsolved enigma and human actions do not take place under godless skies, where there is slippage between the roles of victim and persecutor. This slippage is observed by a ruling class that is silent until it loses its power and ultimately its very existence. Who has the right to commit a crime and where does this right derive from?

Eumenides
Orestes is at Delphi, having been pursued there by the Furies. He prays at the sanctuary of Apollo, seeking the god’s protection, and is told to go to Athens, where he begs at the feet of the statue of Athena. The enraged Furies follow him, spurred on by the ghost of Clytemnestra. His fate will be decided at the highest court of Athens, the Areopagus, where he and the Chorus of Furies argue their cases. The result is a hung jury, and Athena, who has the casting vote, finds Orestes innocent. He praises Athens and announces that the city and his homeland shall henceforth be bound together in an unbreakable alliance. Athena honors the Furies and declares them the kindly ones, or “Eumenides”.
The trilogy ends with the restoration of balance amidst an atmosphere of reconciliation, bringing an end to a tragic conflict which human beings were unable to resolve. It is significant that the trilogy was written shortly after 462 BCE when the system of government changed and one of the reforms was that cases of murder were now tried at the Areopagus