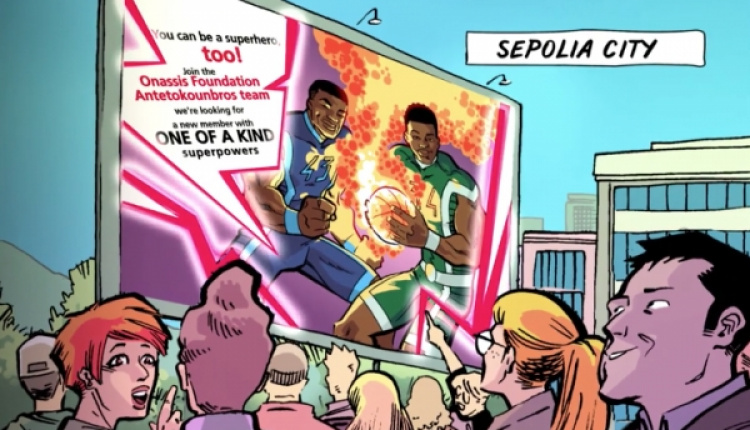 The selection process for the Special Scholarship established in honour of the Antetokounmpo brothers is complete and scholarships were awarded to two successful applicants!

It was in June 2017, at a moving event held at the Onassis Cultural Centre Athens that Giannis and Thanasis Antetokounmpo, looking back at a difficult childhood and the obstacles they had faced starting out in life, dared to speak openly about important social issues like racism and the difficulties they had faced in their effort to acquire Greek citizenship. During the event, the Onassis Foundation joined forces with the brothers and announced the establishment of the Special Undergraduate Scholarship "One of a Kind" for the children of immigrants living in Greece – just like Giannis and Thanasis Antetokounmpo.

As the Onassis Foundation Director of Culture, Ms Afroditi Panagiotakou, explained at the time: "The symbolic establishment of this scholarship serves a dual goal: to provide a kid, who either does not have Greek citizenship or who acquired it within the last five years, with the opportunity to study and make their dreams come true and to send out a message in favour of a more open civil society”.

Ultimately, the selection process produced not only one but two successful candidates: Katerina Ampntel Saient and Jacub Maciejewski, two students from Sepolia! Although the original intention was to award the scholarship to one high-school graduate, the Onassis Foundation, taking into consideration all the selection criteria, decided to award it to the two prevailing candidates: Katerina and Jacub.

According to the terms and conditions of the scholarship eligible candidates must be graduates of Greek public General and Vocational High Schools in the 4th municipal district of Athens – the same area where Giannis and Thanasis Antetokounmpo started out on their unique journey and endeavours. And even though Katerina and Jacub may not share the same talent for basketball, they know what they love in life, they have dreams, and they have shown through their academic success that they have the 'superpowers' they need to make those dreams come true.

Excited with the results of the scholarship, Giannis and Thanasis Antetokounmpo wanted to congratulate the two winners through the Onassis Foundation announcement.

Giannis Antetokounmpo stated: "I would like to congratulate Katerina and Jacub; may they achieve everything they dream of. Above all else, may they make the most of the opportunity they have been given, keep up their hard work, and reveal their superpowers to the world. Sport is a wonderful path to follow, but I believe education can open up even more possibilities. Which is why I am happy and proud that two young people will have the chance to do something I could not—go to university—and have the Onassis Foundation at their side while they do it. The scholarship established in our honour will ensure they have the peace of mind they need to succeed. I would like to also thank the Onassis Foundation for giving us the chance to join forces for this good cause".

For his part, Thanasis Antetokounmpo, who had the chance to meet the two scholars in person, declared: "As I said after the event at the OCC in June, this is an outstanding initiative, because it gives the children of immigrants, children like us, the chance to move forward and make progress towards achieving their goals. I would like to send my congratulations to Katerina and to Jacub along with a message to all the kids who have, for whatever reason, had a difficult start in life: don't give up! Find your superpowers within and believe in your dream."

On the basis of their performance in the Higher Education Entrance Exams, Katerina Ampntel Saient, who is of Egyptian descent, was admitted at the department of Russian Language and Literature & Slavic Studies of the National and Kapodistrian University of Athens. Jacub Maciejewski, who is of Polish descent, was admitted at the Department of Information Technology of the same University. Despite having had a difficult start in life, thanks to their passion, commitment, ethics and, of course, hard work, they managed to stay focused on their goal and get admitted into university. The Onassis Foundation will be at their side throughout their undergraduate careers, helping them through the "One of a Kind" scholarship to make their dreams come true and reach as high as they can go.

It wasn't just the Antetokounmpo brothers' success that inspired our collaboration, it was also the qualities the two Greek athletes embody: modesty, competitiveness, passion and a willingness to work hard.

Watch the animated video HERE and take a journey into the world of this "one of a kind" scholarship!

For more information on the "One of a Kind" Scholarship, please visit: Onassis Foundation