Limnos: The island of Hephaestus 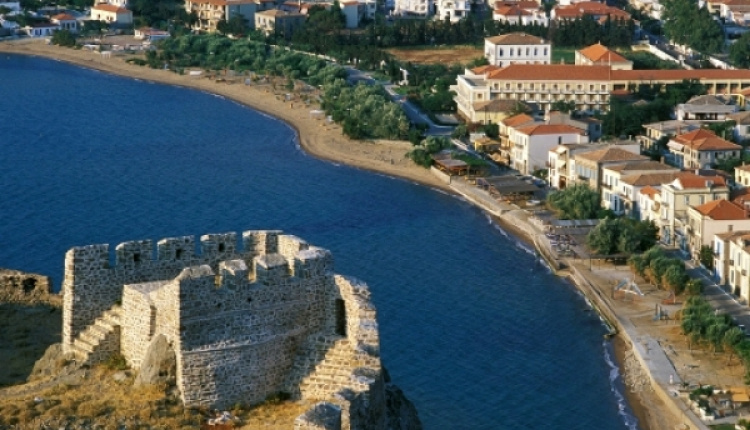 Serenely floating in the north of the Aegean Sea, Limnos (also spelt Lemnos) is a destination for a peaceful holiday in close contact with nature. Sheltered gulfs, extensive beaches and landscapes of volcanic rocks, alternate with small hills and traditional villages of stone houses. The volcanic island of Hephaestus, god of fire, lends its fertility to fruitful plains, which the locals make the best of by producing goods of unique taste and excellent quality. Among them, the renowned Muscat of Lemnos, a Designation of Origin of Superior Quality sweet white wine with golden colour, rich aroma and full taste, and the cheese “kalathaki” (=little basket) a kind of white cheese that is left to dry and mature in small straw baskets, as well as its delicious yellowish version called “melíchloro” (meaning soft cheese of honey colour).

The tasteful thyme honey and the fresh fish are also some of the great gifts of nature to the lucky island.

The history of Lemnos is lost in the mists of time. According to mythology, Hephaestus had his forge on the island and taught its first residents, the Sinties, the art of processing copper. The Island flourished during prehistoric times. In 512BC it was conquered by the Persians, but it regained its liberty after the end of the Persian Wars. Since then, it had been subjugated consecutively by the Romans, the Venetians and the Turks, until its definitive liberation in 1912 during the 1st Balkan War.

Capital of the island is Mýrina, a town beautiful for its traditional paved alleys, its old stone mansions, its promenade by the sea, and last but not least for its Byzantine Castle. The impressive castle that overlooks the town lies on a rocky and steep peninsula, on the hillside of which small deer roam free.

Touring around the island is as much an enviable experience as choosing only some of its beauties to write about is a nasty task. Still, a visit to Lemnos is not complete without having been to:

• The Petrified Forest near the town of Moudros, where one has the chance to see fossilised trunks, leaves, fruit and palm-tree roots aged 20-22 million years.
• The prehistoric settlement of Poliochni which is thought to be the oldest Neolithic city in Europe. Actually, a rectangular building with a double row of stepped seats that had been found on the site resembles a parliamentary architectural structure; that’s why it is presumed to be the oldest parliament discovered in the world!
• The archaeological site of Hephaestia, the prehistoric capital of the Pelasgians, whose glory days lasted well over 2000 years (1000BC to 1200AD). Admire the ruins of a complex of a city built and rebuilt in 10 layers, including palaces, baths, Christian churches, a Hellenistic-Roman theatre, a necropolis, and a sanctuary dedicated to the great goddess Lemnos.
• The two small lakes Alyki and Chortarolimni which constitute wetland habitats, refuge and breeding places for rare and endangered bird species.
• The ideal for skin conditions and urinary system problems thermal springs of Hephaestus, at only 4km from Mýrina.
• The waterfalls near the village of Káspakas, where the waters rush off a height of 15m to create an appealing natural site dotted with small plateaus and tiny ponds.
• The village of Kontiás, one of the biggest and most beautiful ones, which is built on a pine-clad hill and is decorated by traditional stone houses, deserted windmills, and the picturesque church off Ághios Dimitrios with the stone bell tower.
• The gorgeous sandy beaches of the islands, which range from peaceful, remote, romantic to busy and well-organised ones. Especially the water sports lovers will go crazy for the beaches of Thanos, Gomati (treat yourself with the pleasure of rolling on the sand dunes there) and Keros, with the last one being a well-known centre for aquatic pleasures and sports activities. Nevertheless, the repeaters of the island and the locals would answer Platý or Chavoúli should they be asked to choose a beach to appear on a postal card from Limnos.