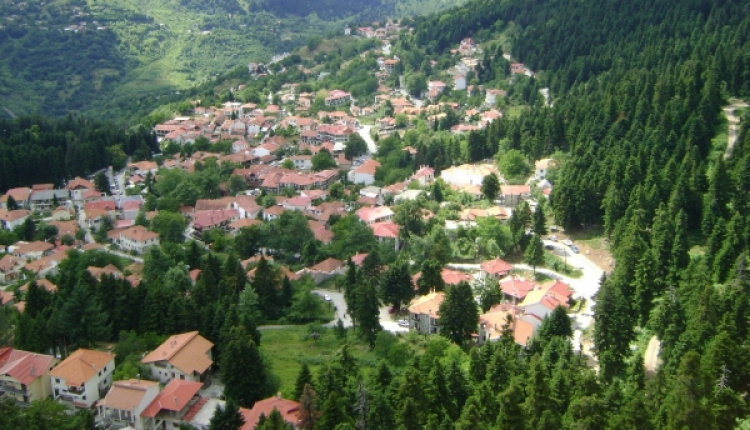 Elati is a very beautiful highland winter and summer resort of Greece. It lays at the south part of Pindos's mountain chain, 32 km away from Trikala city. The village is built amphitheatrically in a fir forest, at a height of 900 meters on mount Kerketio (Koziakas). References relative to the date of establishment do not exist however, according to tradition, Elati was inhabited a few years after Konstantinoupoli was conquested by Turks.

This is proved by many Byzantine findings. The present location of the village is fairly new. The village before 1943, was located more west near the river. That was the year that the village was burnt by the Germans.

Along the drive from Trikala to Elati, it's worth seeing the Porta Panagia church, built in 1283 in the large village Pili, as well as the arched bridge, over the Portaiko river, which was built in 1514 by Saint Bissarionas. In this area, there are many monasteries. Monasteries still in function are Moni Gouras and Saint Bissarionas, which are both located at Pili's area. The rest of them are deserted but they can still be located near the villages Neraidohori, Pirra, Desi, Gardiki.

Visitors to Elati can enjoy many sports or other activities. During the winter, a small ski center, located on the 7th kilometer on the way to Pertouli, keeps visitors entertained. Also there is a stamina-ski course. During spring and summer, there are many paths for a walking tour in the forest with springs and meadows, and also long roads in the forest to be travelled by car, motorcycle, mountain bicycles and even on horseback. At a quarter of an hour from the village at the Kokkinos Vrahos location, are three climbing stages. Below the highest peak, Koziaka, there is the Chatzipetros's shelter which can provide accommodation for 20 people.

In the area's rivers, you can fish and swim in the cold and crystal-clear water. A large variety of wild animals exist in the forest, such as pheasants, partridges, woodcocks, hares, roes, bears, wolves etc. A special mention must be made about the area's flora which features many variations, hence why Koziakas is considered to be Asklipios`mountain.