Athenian Experiences Not To Be Missed 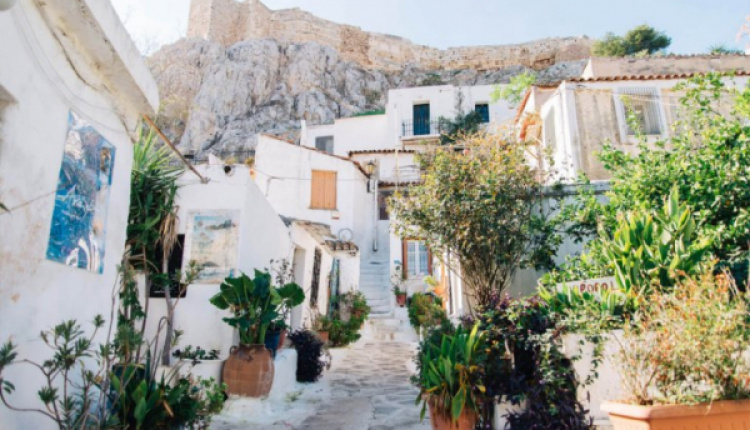 Have you ticked off the Acropolis and already done Plaka? If you're looking for some great must-do experiences in Athens, don't miss out on these fascinating Athenian experiences.

We’re thinking movies in open-air theatres, hillside strolls at sunset and lunches by the sea!

Find The Greek Islands In Anafiotika
How so many visitors to Athens manage to miss out on romantic Anafiotika—even though it’s just below the Parthenon—is a complete mystery. A serene Cycladic village smack in the city centre, Anafiotika was built in the mid-19th century by stonemasons from the island of Anafi, summoned by King Otto I to build his palace (today’s Parliament building). By night, the islanders knocked up these humble, whitewashed dwellings for their own families. Once illegal, these flower-framed cottages are now an essential element of Athens’ architectural heritage. A perfect escape for those who don’t have time to hit the Greek islands, Anafiotika is Insta-heaven. Getting lost in the meandering, nameless lanes is half the joy.

Watch The Sunset
Athenian sunsets never grow old. The higher you go, the more impressive the show. So join the stream of locals racing up to Areopagus Hill as dusk falls. Just opposite the gateway to the Parthenon, this rocky outcrop was where the ancient city elders presided. It later served as a criminal court where murders were tried. These days, it’s a popular spot for courting couples and young friends, simply known as Vrahakia (“little rocks”). From up here, you can see get a sense of the modern city’s topography as well as its ancient iconography. Wear sneakers—the rocks have been worn smooth by countless bottoms perched here over the centuries.

Catch A Concert At A Roman Amphitheatre
There are music venues and then there’s the Odeon of Herod Atticus (or rather, the Herodion, as every Athenian calls it). Some pretty stellar names have played at this epic 2,000-year-old arena on the southern slopes of the Acropolis. Frank Sinatra, Elton John, Andrea Bocelli, Liza Minnelli, and, of course, Maria Callas. Put them all together and they still can’t outshine the star quality of the Herodion. From May to October, it’s the main open-air venue for the Athens Festival, an international bonanza of arts and culture. On stage, global icons like Sting gaze up at the moon rising over the glowing Parthenon, as if to say: “Holy cow”.  And so will you.

Wrap Your Chops Around A Souvlaki
Leaving Athens without sampling our finest street food? We don’t think so. With a history dating back centuries, these moreish skewers of char-grilled meat are Athens’ answer to the hot dog in New York or fish and chips in London. Beloved by locals-on-the-go as a cheap and hearty snack between shopping, meetings, or bar-hopping, souvlaki comes in all kinds of tasty guises. You can even get vegetarian options these days, wrapped in pita bread and drizzled with secret sauces. You really can’t go wrong, especially if you go to one of the locals’ favourite souvlaki joints.

Do An Olympic Workout
There are plenty of scenic running routes in Athens but the most heart-racing one is the 500-metre, pine-shaded track that runs above the Panathenaic marble stadium on Ardittos Hill. Grab your Nikes—they were named after the Greek Goddess of Victory, you know—and slip through the green gate on Archimidous Street (just behind the stadium in Pangrati) to access this hidden running track with rousing Acropolis views. It’s free to use and overlooks the gleaming stadium that kicked off the modern Olympic Games in 1896, the world’s only athletic arena built entirely of marble. There’s a running track inside the stadium too, if you really want to act the sporting champion.

Say A Little Prayer
Wandering the streets of Athens, you’re likely to spot locals making the sign of the cross—a telltale sign that there’s a church nearby. They may not be obvious at first glance, but the magical Byzantine churches of Athens are peppered among the city’s apartments and squares. Athenians throng to church in the week before Easter on the Assumption of the Virgin Mary on August 15. But step inside a Byzantine chapel any time of day or year and you’re transported to medieval Athens. Light a candle, say a prayer or make a wish, and watch the flames flicker over the frescoed dome and gold-tinged icons. You might stumble upon a church service, christening or wedding in progress. Don’t hesitate to join in. The musky, meditative world of Greek Orthodoxy is open to everyone.

Sunday Lunch By The Sea
Most Athenians don’t care a jot about the shops being shut on Sundays. They’d much rather be indulging in one of their favourite pastimes: the marathon Sunday lunch by the sea. Year-round, you’ll find Athenians enjoying high-spirited feasts all along the Athens Riviera, from the fancy seafood restaurants of Mikrolimano, near Piraeus, to the laid-back, seaside tavernas of Varkiza and Kavouri. To lunch like a local: go late (never before 2 pm), order dozens of meze to share, and squabble at length over who gets to pay the bill.

To read more of these unique experiences in Athens visit: This is Athens
Photo Credit: Thomas Gravanis
Whether you’ve just arrived in town – or have been here for years – Athens always has new secrets to share! This is Athens is the official guide to this captivating city of ancient energies and booming urban culture. Compiled by a team of specialist local writers, This is Athens brings you an authentic and intimate portrait of a living Athens beyond the guidebooks – along with daily curated listings of all the best events and great weekend inspiration all-year round. From must-know neighbourhoods and emerging art hubs, to gourmet hotspots, cool shopping and the buzziest bars, This is Athens will help you to get the most out of living in Athens!