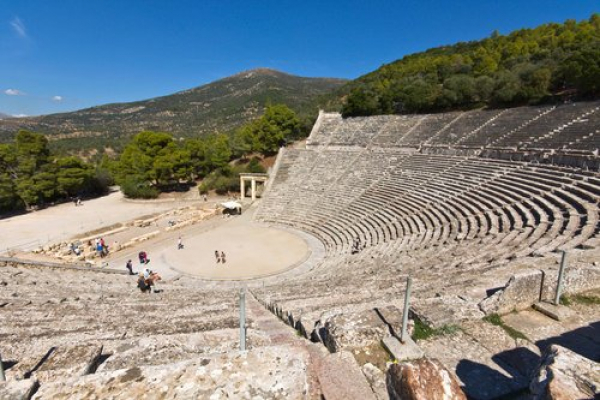 This presentation of The Birds by Aristophanes forms part of the Athens and Epidaurus Festival program for 2020 and will be performed at the magnificent Ancient Theatre of Epidaurus.

Fed up with the political, social and financial corruption of the city, Pesthetaerus and Euelpides seek Tereus, formerly a human and currently transformed into a hoopoe, in order to learn from him and from the other high-flying and perhaps knowledgeable birds whether there is a peaceful place where they could settle. Together they intend to found a new republic, somewhere between heaven and earth, that will hold dominion over both humans and gods, and where birds will have their rightful place. Aristophanes’ beloved, ageless comedy is presented in a National Theatre of Northern Greece production, directed by Giannis Rigas, translated by K. H. Myris and featuring aa stellar cast. Taxiarchis Chanos and Christos Stergioglou portray the main characters, joined by a large cast of actors and dancers.

Aristophanes received the second prize in the Great Dionysia Festival in 414 BC. Scholars around the world consider it among the best of his surviving works.