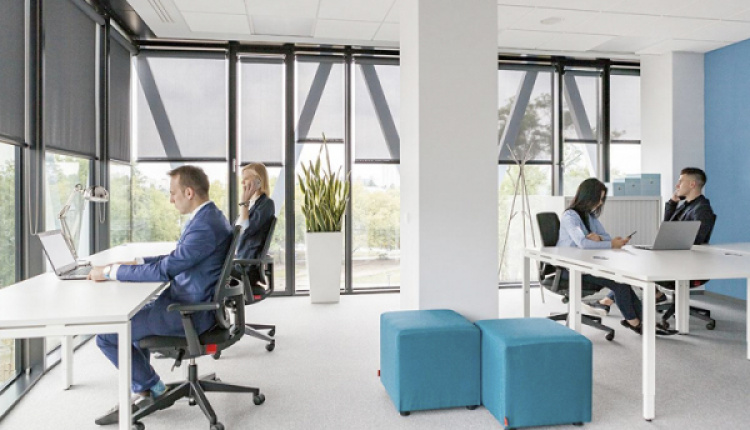 While flexible working may have been the natural choice for SMEs, it is becoming a cost-effective option for large, global corporate companies who want to become more agile.

Greece's recovery from the economic crisis is still ongoing, but as its startup and tech community has begun to grow in earnest, so has the demand for flexible co-working spaces from entrepreneurs and executives over the traditional, fixed office environments that come with long-term leases and high overhead costs.

Co-working spaces provide shared, collaborative environments that can house like-minded people, and have been used by companies to better manage risk and reduce CapEx/OpEx, while Athens has become a real hub for the country's burgeoning tech sector, which is now starting to truly thrive.

Marco Veremis, an angel investor and the founder of one of Greece's tech success stories, Upstream, recently told the Financial Times that he estimates Greek tech companies today have a combined market capitalisation of around €2bn – a decade ago, it was nearly zero.

This has been helped by the government-backed investment schemes created in recent years to help young Greek businesses get going. Uni.fund provides seed capital to startups in Greek universities focusing on R&D and the tech space, while SMEs can apply to EquiFund, a fund-of-funds co-financed by the European Investment Fund that aims to strengthen the venture capital market in Greece.

While tech companies grow and the country’s economy continues to recover, flexible workspaces are becoming increasingly popular. By September, IWG will have opened four coworking spaces in Greece in the space of a year.

Katerina Manou, VP Sales at IWG in Greece, says flexible workspaces have emerged in the country as a response to specific market conditions and firm requirements. “Increased external volatility, high sunk costs for setting up conventional office space, an emphasis on flexibility to expand and contract operations in line with business development are all factors that have contributed to making flexible workplaces an attractive option,” she said.

One of the outcomes of the crisis over the past decade has been that perceptions within the business community about the most efficient way to run both small and large firms have been “fundamentally reshaped,” Manou said. “It is now clearer than ever that the workspace should not be a liability for the bottom line of a firm, but an asset contributing to a firm's operations,” she added.

And Manou says that “a new generation of entrepreneurs and executives have embraced the idea, and are driving demand, as the Greek economy is slowly picking up again”. On a real estate level, turning conventional office premises into coworking spaces can breathe new life into under-utilised properties, and can revive entire districts that are run down due to the economic downturn,” she added.

But flexible workspaces offer benefits to all types of businesses, not just start-ups. And as IWG's 2019 Global Workspace Survey has shown, flexible working is the new norm. After canvassing more than 15,000 businesses across 80 countries, IWG found that the number of employees who want flexible working options has grown to 75 per cent, while over half of workers globally are getting their job done from outside their main office headquarters for at least 2.5 days of the week.

And while flexible working may once have been the natural choice for small-to-medium sized businesses, it is becoming a cost-effective option for a number of large, global corporate companies that are using it as a way to become more agile and to help mitigate risk, the research found. A total of 65% of businesses said having a flexible workspace helped them to reduce CapEx/OpEx, shed unnecessary assets, and consolidate their portfolio.

Manou adds that while flexible workspaces allow companies to reduce the cost of operations and become more competitive, which in turn benefits the Greek economy, they are also helping a new era of business leaders “who have come to terms with the idea that business survival depends on how flexible firms are in reacting to external disruptions, and are able to adapt by turning challenges into opportunities,” she said.

Could a serviced office be the right option for you?
Check out Regus' flexible workspace locations to find a base for your international team!