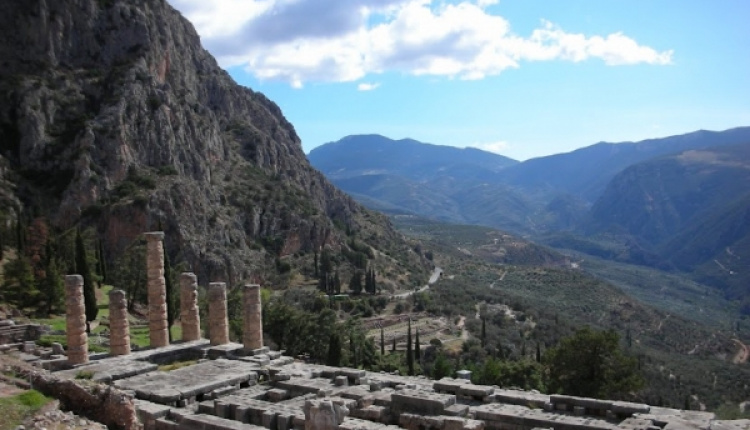 This week, I'm happy to share the spotlight with Rebecca Hall, a member of our Xpat community and the author of the 'Leaving Cairo' blog... Rebecca shares her 'bucket list' of things to love about Greece - does it match yours? Hope you enjoy...

7 Things to Love About Greece and Greeks

Someone was talking about a Bucket List at work the other day. "Leaving Cairo..." got to thinking about lists...shopping lists, mail lists, etc etc. I decided to make this list and share it with you here: why I love Greece and the Greeks. Most of it will be a summary or repetition of posts I've shared before, but no harm in reminding everyone and summarising here, especially in these times.

1) Because half an hour from the centre of Athens (by public transport), I can be here:

2) Because if I have some time, I can rock up at Piraeus and be here:

Island of Poros - about 1hr from Athens by ferry

3) Because even though I live in the centre of a big city, when I leave my place in the morning, I am offered a "Kali Mera!" ("Good Morning!") from at least 4 people - be it the man in the electrical shop next to the apartment block I live in, the flower seller at the end of the street or a complete stranger walking 2 very old pug dogs.

4) Because people join in on the trolley buses and get involved if there's a 'problem.' Of course, this can become a problem in itself sometimes as it'd be nice if people could sometimes mind their own business - but mostly it's the older people that get involved and I feel a little bit safer, knowing there are older people around me who aren't so afraid to speak up (how long will THAT last?).

5) Because mostly, a Greek is honest with you.

This can range from: "There's cappuccino froth on your nose" to "How the hell did you get that job, you incompetent a***. My grandmother could do a better job, and she's dead."

They are at least STRAIGHT with you.

6) On that subject: Because Greeks have lovely sayings.

My favourite is "A dog licks its balls because it can" to "Agappy mou!" (meaning "My love!" but it must be said in a high pitched voice and accompanied by lots of air kissing, even if you're male. It sounds lovely, particularly when said to a young child or pet. Go on, try it).

7) Because once you're accepted into Greek society - that's it...you've made friends for life, and I mean REAL friends. I had dropped in to see 2 friends the other night and they made dinner (another one to like: you can just drop by and you'll be given dinner, raki, ouzo and not leave till about 2am, be warned) and our conversation inevitably lead to "The Crisis." I was told in no uncertain terms that they 'had my back' if I EVER had ANY problems. He can kill chickens and pluck them and also cook, a real 'hunter gatherer' so if it comes to it - we'll be OK for a while.

I should stress the chicken made for dinner the night in question was actually bought from an Athenian supermarket...but it's reassuring to know there are still 'real men' out there.

8) Just thought of another one: Greeks know how to drink alcohol in a civilized fashion.

No, you will NOT see your 'average' teen or person in their 20's rolling around drunk in the street, spoiling for a fight and thinking it's hilariously funny. The number of times I've been asked by Greek friends "Why do some people need alcohol like this in order to have a good time? Life is for LIVING! Why do they spoil it?!"

Hmmmm - I have no reply (not being a huge drinker like that, and never having had been).

I had never really eaten until I came to Greece. Well, clearly I had, otherwise I'd be dead, but I mean EATEN. And I eat LOADS and the weight seems to come off me - go figure! It's because the quality is so good. My favourite: Spinach salad with pomegranate seeds, chicken masticato (a chicken dish made with a thick, creamy mastic sauce on a nest of stringy pastry) and of course, gyros.

At least the fast food is sort of healthy. Hell, their fast food chain "Goodys" has a massive salad counter. If you're here, go and experience Greek fast food.

Of course, Greece and Greeks are also frustrating, but I want to concentrate on the positives for now (for obvious reasons). One final note: Greeks have been through hell before and survived...don't underestimate them.