A House In Greece 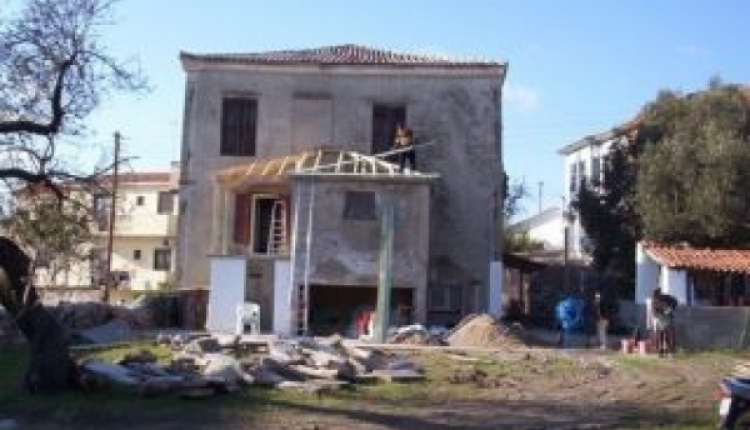 When my husband and I decided to take up a retirement project to renovate a large old house in Greece we were filled with excitement. That was ten years ago, and since then we have been travelling to our old house on the island of Lemnos in the Aegean for six months every year. But it has not been all blue skies and tavernas.

It was a project that would take its toll in various ways, emotionally, physically and financially over the years. We’ve watched the exchange rates, carefully noting when they went up or down. And then, when economic uncertainties hit Greece and the worldwide financial crash hit, we wondered how long we could afford to keep flying to Greece and paying for the renovations. There is no doubt that Ogden Nash got it right when he wrote that ‘It takes a heap o’ livin’ in a house t’ make it home. It takes a heap o’ payin’ too’.

While the dream of a house on an Aegean island, with sunshine, warm seas and rural peace, is something many busy, driven, city folk long for, it’s not easily achieved. Land in Greece always belongs to someone. Even if you spot a ruined house on an empty block you’ll very soon find it belongs to absent landlords who are planning to return sometime soon.

It was Takis’ perseverance over a very long period that enabled us to buy the house. We spent two years exploring our options and then six more years (while renovating) before we managed to fully own his great-grandfather’s house. And then it took even longer to renovate. However, all this time the house has continued to be a magnet for us and has made the effort worthwhile.

It’s been not only a big adventure, it’s been a love story - one with a house at its centre. On Lemnos we’ve lived and laughed, cried and sweated a most marvellous romantic dream-house adventure. Have we allowed the house to become our master? This wouldn’t be surprising, for as Emerson says, ‘A man builds a fine house; and now he has a master, and a task for life; he is to furnish, watch, show it, and keep it in repair, the rest of his days’. And dealing with the needs of our house we’ve found, with so many others, this kind of old house renovation project is addictive.

However, it’s not a simple thing to uproot oneself each year and take on a project such as this on the other side of the world. Travel does not get easier, mice still find holes to enter an old house, and in addition we’ve found that the house is big enough for many guests, sometimes too many! But, when I grumble about these difficulties, my friends are quick to remind me about the romance, ‘You’re on a Greek island, for God’s sake!’ they’ll say, throwing up their hands in frustration. ‘What have you got to complain about?’

I think what we’ve most enjoyed has been the fact that we have been thrown back onto our own resources. There are only a few shops nearby and it’s hard to get what you want when you want it. This is a challenge Takis enjoys, for not being able to go to a large Australian tradesman’s centre, he has to find ways of fixing things himself. As for me, I like working at a slower, more organic pace. One has time to notice the scent of lemon and nutmeg when baking a homemade cake, and to become more aware of garden scents when making bags of lavender seeds.

Of course, no one can have missed the fact that this decade has been a tumultuous one for Greece, with enormous immigration and fiscal problems. Has the economic drama affected us? Of course it has. We’ve always been aware there were problems with the way the Greek economy was run. But like many Greeks, up until the crisis hit the newsstands in 2008 we’d thought, ‘It’s just the way things are in Greece’. Now we’ve had to face the fact that, as sojourners with a property in Greece, everything we possessed in the country has lost at least half its value.

There’s a saying in Lemnos that one cries twice when coming to the island. This saying may have originated from the time when the island was a designated place of exile, and folk would cry when they landed on the island, going there reluctantly, but often they would cry again when they left, as by then they’d fallen in love with the island and its people. It’s a saying I’ve also adopted, for there have many been times when I’ve come to the island grudgingly, and many times when on leaving I’ve walked around my Greek garden very unwilling to depart.

But, after each questioning period, we’ll always decide that we’ll keep coming - at least for a few more years. For while riots and street marches occur in the capital cities, on the whole these troubles have not greatly affected our island. Here life appears to continue much as it did when we arrived. The town still doesn’t have municipal sewerage, the bells still wake us at seven on Sunday mornings, and while a few shops have closed on the Agora, others have opened.

The time will eventually come when we have to leave permanently and there will be so many things we’ll dearly miss, especially those sounds that are completely lost in a big city: the music of cockerels calling early each morning, the chatter of young children walking home from school, and even those street sellers who blare out descriptions of their wares as they drive past each day in summer.